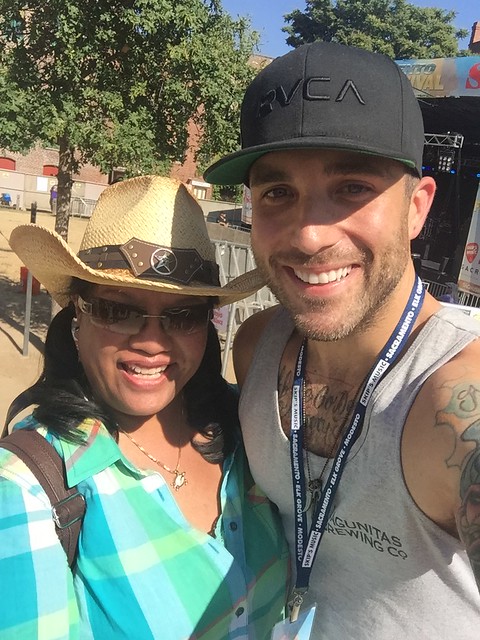 24 May 2015
When I found out that Tyler Rich was going to be at the Sacramento Music Festival, I thought, “Now that would be a fun venue to attend.” It had been awhile since we’ve gone to such an event and it would be fun to be out in the sunshine with good music and yummy food. Everything fell into place and we made our plans to go to the festival.

Of course, in the days leading up to the festival, I tweeted and Instagrammed at Tyler here and there and he’d either reply or like my stuff (always a little thrill, I must admit). At one point I randomly wondered if I’d get within hugging distance of him. He replied that it was an open stage and crowd, plenty of hugging space. I replied to his reply that I was angling for a hug then and a picture with him. (I am particularly cheeky online when the mood hits.)

The Sacramento Music Festival was situated in Old Sacramento, one of my favorite places to visit when in Sacramento (mostly because of Joe’s Crab Shack). It’s a cute area with some neat shops and restaurants (like Joe’s Crab Shack). For the festival, different areas showcased the music, the biggest being the Turntable on the Green, which is where Tyler played.

We had a drink, we had hot dogs, we walked around and checked out some of the other musical areas before finally heading back to the Turntable on the Green. Toree McGee, the gal before Tyler was finishing up her set, ending with the classic, “Piece of My Heart”. Toree is pretty awesome, full of energy with a great voice (and she’s local to this area!). When she was finished, we headed to the front of the stage and I stood front and center and waited. 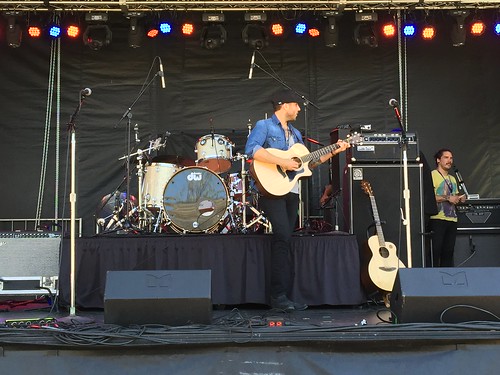 Tyler came out to do his soundcheck. Yah! He waved at those of us already standing in front of the stage and we made eye contact. Cool! The local country station was playing over the speakers and OF COURSE Sam Hunt’s “Take Your Time” started while Tyler was out there. I couldn’t help singing along to Sam’s song and I watched Tyler as well and he was singing it as well. It seemed fitting to me, since it’s because of Sam that I even know anything about Tyler. After the soundcheck, he headed backstage and out of sight.

When 3 PM rolled around, Tyler hit the stage. It was just him, his guitar, and the microphone. His friend James Cavern joined him for a medley which was pretty awesome. Tyler did a mix of mostly originals and a few covers. He sounded great, I loved all his songs, I wanted MORE. I gave my little camera a workout and videoed the set. (Hope Tyler doesn’t mind!) I did the last two songs on my phone (which ended up sounding better than the camera audio, alas). When Tyler finished, the lady next to me asked him for the setlist (why did I not think of that?!) and I asked her if I could take a picture of it and she said yes. So sweet.

Tyler came up to the few of us who waited and took pictures and gave autographs. I waited my turn because I had in my back pocket a letter I had written him as well as a bag of Red Vines in my backpack. When it was my turn, I wasn’t sure if we were going to shake hands but he came at me with his arms open to give me a hug. HOW SWEET! I think he said thank you for coming out or something like that and I’m sure I forgot to tell him he was amazing on stage and that I very much enjoyed his set. I took out the letter from my back pocket and gave it to him and he was excited about it. He told me that he tried to decipher it on Instagram. (Really? Awww!) I told him not to freak out about my letter (well, more the card) and he was sweet about it. We took a picture together and I almost forgot to give him the bag of licorice in my backpack. When I gave it to him, he smiled and took it and said it was his Kryptonite and he was going to eat it all. I think I got another hug and then I took my leave. 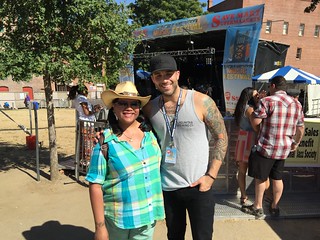 But just as we were going to walk out, I remembered that I wanted to ask him about that one song (“Like the Way”). So I went back to him, got a picture of part of his arm tattoo (so pretty, I could probably just look at it for a long time), and asked him if he was going to get anymore tattos or had any new ones. No new ones but he wants to eventually get his whole side done (brave!). I then asked him about the song, whether it was an original. He wrote the song about five years ago and it was cut as a duet to sell but it never went anywhere and now it’s just out there. I told him I liked the song. I asked him for another picture and he took my phone and took a few shots of us. One more hug and thank you and off I went. 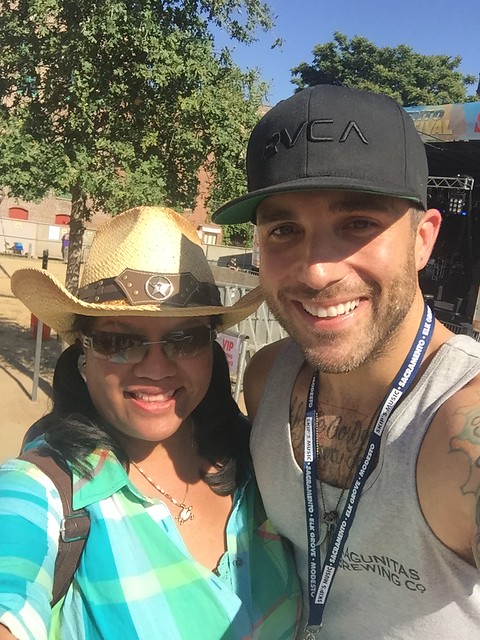 Tyler is a selfie king, I tell ya!

My afternoon was quite complete and we ended up heading back home. All that sun and walking around coupled with a great musical set was enough for me. I was happy and tired and glad for it all. As we headed out, I posted one of our selfies and before we were in the car, I had a few likes on it.

And it was a good thing we took the selfies because the first picture we took together had him with his eyes closed. Ooops! But our selfies turned out quite cute, mostly because of him. Tyler retweeted it along with a sweet reply which of course just made me adore him more.

I caught every song and turned them into audio files so now I can listen to Tyler whenever I want (now I have more besides “Radio” and “Like the Way”). I really love his original stuff and cannot wait for him to release an album. He has a strong voice, great guitar skills, and a definite way with lyrics. He seriously has it all and it’s going to be a treat when the rest of the world gets to hear him. (Go get “Radio” if you haven’t already! Do it!) 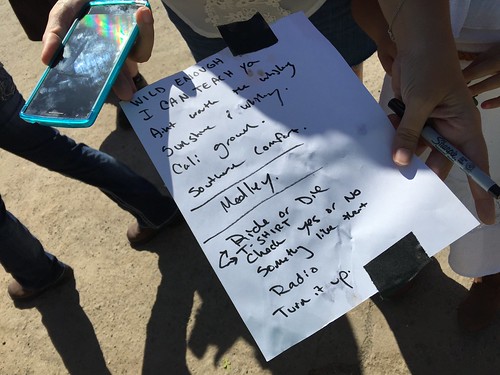 I think it was more of a guide…

(* Second time hearing these songs. First heard them at Ace of Spades.) 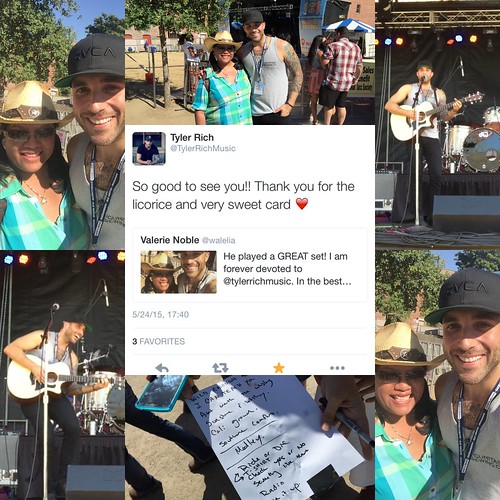 AFTERWORD
I’ve been sitting on this rundown for awhile, hoping to get over the first blush of it all but nope, that hasn’t happened yet. So I’m posting this with much gushing intact along with this…

Tyler, you are really lovely. You are awesome on stage. Thank you for being so sweet and generous with your time. Having those few minutes to talk with you just made me like you even more, of course. I’m glad to be part of your journey as a fan. Cannot wait until you’ve got more songs out there! I hope to see you again in person and maybe if I do, I’ll bring a little Maker’s Mark. 😉 But truly, I love your music, your sweetness, and your generosity. May you keep that sweetness! Thank you most of all for the moments with you. It really means a lot and fangirl me absolutely loves you. Oh, and you’re a great hugger! 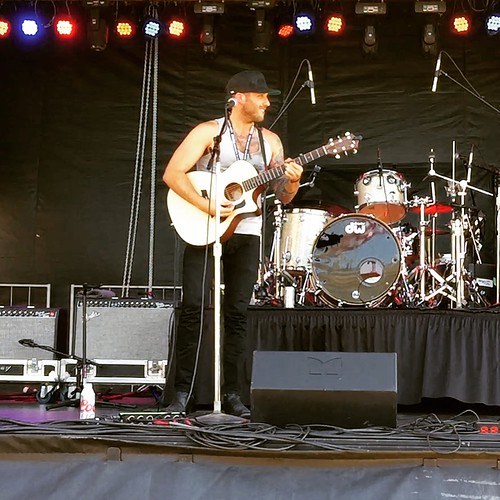