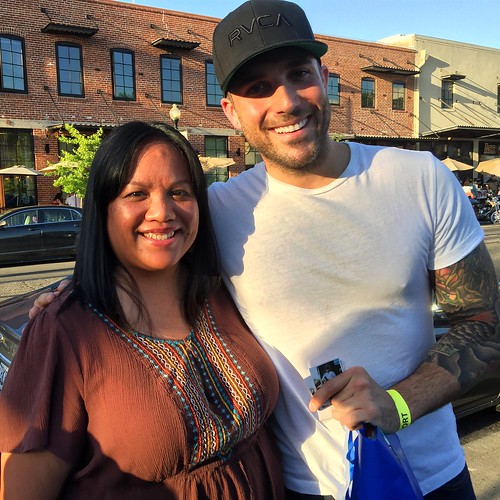 Work was a good day, especially since at 2:30 PM I was off and headed home. Out the door by 3:00 PM to drive up to Sacramento and got there in plenty of time. In fact, we were able to eat a late lunch and have a beer before joining the line of people across the street from the venue. 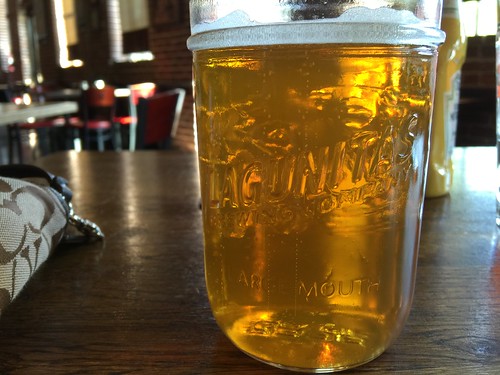 We stood in hot sun, which was blessedly at my back, and I made friends with the ladies standing behind me. One was Kelly. She works at KAT Country 103. I didn’t get the names of the other two gals but we all had great conversations. I asked them about the venue (Ace of Spades) because I’d never been there and they were very informative. I ended up standing with them near the front and they were very fun gals. Bummer I didn’t get their names! Kelly was great too and I wish I had gotten her contact info because it would rock to know someone who works at a radio station, right?! Anyhoo, she was there to see Cole Swindell and she had a Meet and Greet with him (lucky gal!). She had lots of different stories about meeting lots of different artists and I couldn’t help envying the perks of her job. 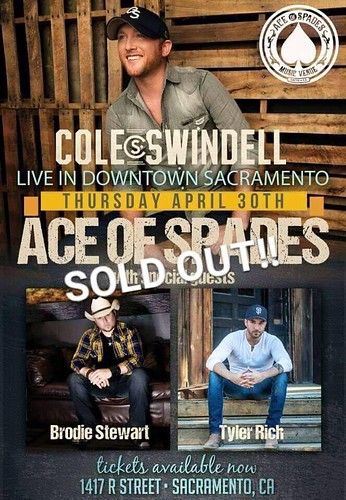 I was there to see Tyler Rich, the first act of the night. I’ve been following him on Twitter, Instagram, and Facebook because he started favoriting and liking my Sam Hunt posts. One day I got curious enough to look at his profile, then listen to his song, and his cutie pie looks and sweet smile kinda hooked me and I just had to follow. Plus hello, California boy! So one day we were at the bar, talking about perhaps watching The Avengers movie at midnight opening night and I casually mentioned wanting to see Tyler Rich and in the end, I bought tickets to the Cole Swindell show (even though he just won the ACM New Artist of the Year and I had voted for Sam Hunt) because Tyler was opening for him. After I bought my tickets, I tweeted at Tyler that I was going to the show and I hoped to meet him. He replied that he would say hello to the line, which meant that we’d have to be there early.

So we were there early, standing in the hot sun. We saw Tyler get dropped off. He waved over at the line but didn’t come over. Later, we saw him walk to a truck down the street but he still didn’t come over. Was he ever going to come over?!

I’m sure I was amusing my line-mates. I had to refer to Tyler as “the cute one” to one of the ladies. And I confessed that I really just wanted to see him and that I hadn’t voted for Cole Swindell. I mentioned Sam Hunt but it sounded like they weren’t too interested in him. (What, how can that be?! I know, I thought the same thing.)

Tyler finally came out AGAIN but he was still across the street, this time at the radio station’s tent. He hung out there for awhile and then FINALLY crossed the street to the head of the line.

By now it was nearly time for the doors to open. Tyler had fifteen minutes or so to get to us and I was getting anxious. I know it’s silly but he was SO CLOSE and I would have been SO BUMMED if he didn’t get to our spot. He chatted, he took pictures with people, he moved SLOWLY down the line. It didn’t seem like we were so far away but as the time ticked, he just seemed so far away!

About five minutes until they were to open the doors, Tyler was SO CLOSE, like just a few people ahead of me. I was anxious, my line-mates were anxious for me too, I think. It would have been hilarious except I was the one who was anxious. I was going to play it off like it didn’t matter if I didn’t meet him but inside I was a slight bundle of nerves. Especially since he was so close. When a couple of guys came up (friends?), he handed them each a stack of his cards to give out to the line. Those fellas started somewhere behind us so that meant that Tyler was going to get to us. Yah!

It’s been awhile since I’ve met someone I’ve wanted to meet (does that make sense) so I might not have been as calm and cool as I wanted to be but I managed my words well enough, introducing myself and then getting a few cute pictures with him. He’s a lovely young man and I was so glad that I got to meet him. 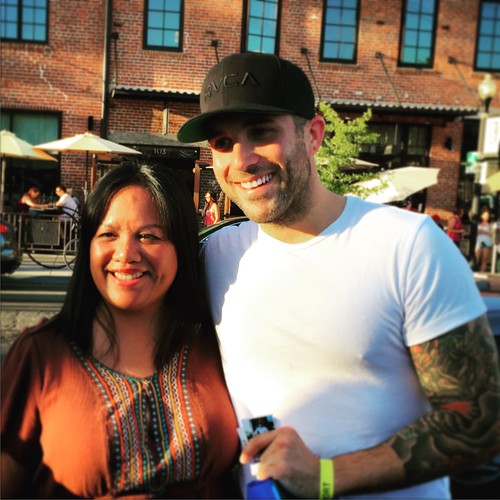 another version of the same moment

The doors finally opened and we were moved in bunches. We were in the second bunch and got to the will-call window in good time. The gal scanned my tickets on my phone. Yes for technology! And then we were in. 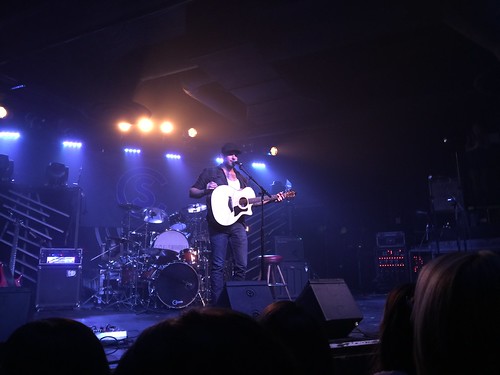 There were already people up towards the stage and I joined them, trying to find a space between the taller than me people. The ladies from the line joined me and it was nice having some people to talk with and they good-naturedly teased me about Tyler Rich. I spotted him at the bar on the left and he dropped off a couple of drinks at the foot of the microphone stand and he gave us the ten sign to tell us how long before he’d be performing.

Seven thirty rolled around and Tyler came out to the microphone with just his guitar and for the next thirty minutes he entertained us with his songs and his cute stories in between. I did record a couple of video clips but I really just wanted to enjoy his performance without taking too many pictures or video. And he was so good so enjoy I did. I only knew two songs (well three but only two I could sing along with) but I’d love to know the other original ones he sang. It was great standing so close to the stage and being able to hear everything and see everything. One of the cute moments was when we wished his friend Happy Birthday. He brought him on stage and they both took a shot. Towards the last part of his set, Tyler brought out Kiersten aka the #girlwithapurpleguitar. He signed her guitar then she stayed up on stage with him for a song. SO CUTE!

I thought about staying in the crowd since I had a great spot but I’m not so much a youngster and knew I couldn’t stand for another couple of hours so I made my way through the crowd. After buying a Cole Swindell hat (no merchandise for Tyler, alas!) and listening to maybe one song of the next band, we decided to take off. I’m sure the next band was rockin’ (they sounded pretty good from what I saw) and I’m sure Cole Swindell did great but I was just getting a bit tired. I would have LOVED to have seen Tyler wandering around but I needed my sleep more.

I really liked the venue! From my spot near the stage, I could hear and see everything. I don’t think I’ve ever been so close to the stage for a show. Later, from near the back, everything sounded great as well. The show was sold out and it definitely felt like it. The crowd was pretty chill but who knows how they were by the night’s end. 😉

It’s been a couple of weeks since the show and my regard for Tyler Rich has grown to fangirl lovin’ proportions. I screencap his Snapchats and then Instagram the more decent shots. I tweet musings directed at him and sometimes he replies, which is quite sweet. I pretty much adore him and wish I had more of his songs so that I can do the whole repeat/shuffle thing like I do with Sam Hunt. 😉

In a week we’ll be seeing Tyler again for another performance, this time for the Sacramento Music Festival. I’m excited! Hope to catch him before or after his set and maybe get another picture with him because can’t have too many pictures with a cute fella.

And Tyler, if you happen upon this rambling of mine, THANK YOU for an awesome show and for being so generous with your time on the social networks. It really does mean a lot that you interact with all of us. I know that I appreciate it very much and it just makes me like you even more. I wish you much success and hope that my sister’s prediction comes true and you hit it big. Just don’t forget us along the way! 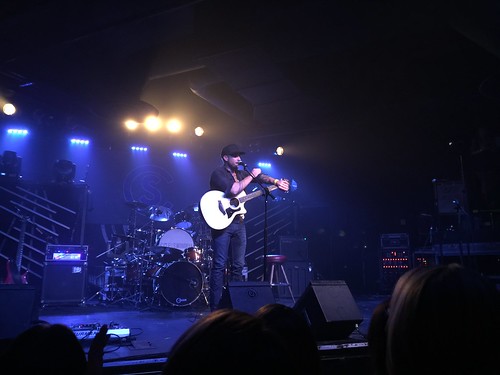