missing only the thrill 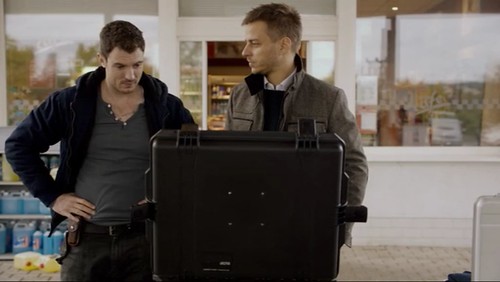 FANGIRLING - I’m sure you’ve noticed that I’ve posted an inordinate amount of pictures of Richard Flood, he of Crossing Lines. It might be more accurate to say I’m crushing on his Tommy McConnel character but when was the last time I liked a character more than the actor playing him? So yes, very much liking the Tommy character and I hope that the second season opens up the character a bit more. Oh, and also hoping that I get to watch the second season without waiting for it to hit Netflix! I’m not patient like that, I tell ya!

BASEBALL - So it’s baseball season. I’m not ready! Apparently the closer for the A’s wasn’t either because the A’s lost their opener last night. Boys, boys! Get your head in the game and do your job and post those numbers in the W column. Hear me? Yes you do.

TV (some possible spoilers ahead?)
How I Met Your Mother – If they had just left it with the fate of the mother, I would have been fine with it. But apparently the story was really about Ted and Robin and their love story. ::sigh:: I really liked The Mother and hoped for more moments with her to really pull at my heartstrings. The last episode just seemed so rushed and the very end just left me a little cold. Okay, maybe a lot cold. I get it, stuff happens in life that you cannot predict or change, but why does it seem like the end, which was I suppose was meant to bring things full circle, felt more like a back pedal, like a clinging to something that didn’t work in different iterations yet the parties involved were too stubborn to realize it? ::sigh::

The Blacklist – I really dig this show so much. It’s smart, filled with drama and intrigue, and James Spader rocks it as Red. Red is the most enigmatic character I’ve had the pleasure to watch in a long time. I love the way he plays him and he’s very much the reason I’m stuck to my tv whenever it’s on. Things are getting nuts on the show with Liz knowing about her husband yet not knowing everything. WHY all this craziness? Why is she so important to Red? I have my theories. Don’t know if any of them will be true. LOL

Intelligence - I wasn’t sure how much I’d like this show but I LOVE it. I love whenever Gabriel’s rendering and I like that for all the advanced tech in his head, he’s still very human. I hope this show has more seasons because I could seriously watch Josh Holloway smile that dimpled smile for the longest time.

The Following – This show is utter madness but we keep watching it. It’s revving up to a frenzy or something because it just seems so out of control. How long can Joe Carroll keep hold of his new followers? What’s going with Lily Gray, what does she want exactly? I’m a little confused by Mandy’s sudden wariness about Joe and his new thing. Maybe she just doesn’t like the whole religious aspect? I dunno. Yet I still keep watching.