I don’t feel like writing a poem right now. I feel like venting just a tiny bit about something that ultimately means nothing but nonetheless bothers the hell out of me. 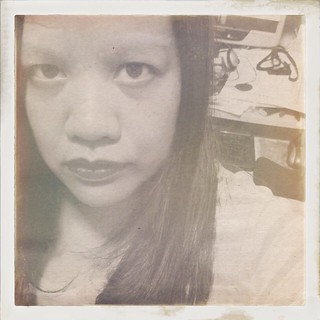 I’m not exactly sure why. If you go through my Twitter feed, you’d hardly call it confrontational or stalker-ish. In fact, I don’t mention Joe that often. He fell off of my Follow Friday list awhile back and since True Blood isn’t on right now, I don’t just randomly mention him. The last time I remember mentioning him was in regards to still liking him but now Laura Vandervoort is my favorite werewolf (she’s the main gal on Bitten).

I was going to mention him again today (again in relation to the whole werewolf thing) but when I started typing his Twitter name, it didn’t automatically come up as it should if I’m following him. Curious, I checked out his Twitter URL and found that I was not following him. WTH? So of course I clicked the “follow” link and got this: 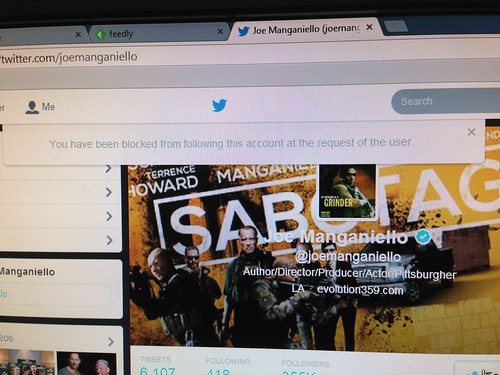 I’m not going to lie to you, I felt a little gut punched when I read that. I’m a good fangirl, I don’t stalk unnecessarily, I don’t badmouth people on Twitter, I’m supportive. So what in the world did I do to get blocked from following Joe Manganiello?! Did I say some crazy thing that actually caught his attention and he was so disgusted/put off/horrified that he just had to make sure to never see my Twitter name again? If so, what the hell did I say?!

I can’t ask him (or the account) because if I’m blocked from following him I’m guessing anything I post to him would go unseen. And if my Twitter friends post to him but mention me too, can he see it? So is it a glitch perhaps? I’ve checked on a few of the other people I follow and everything looks okay. I suppose if I didn’t care in the slightest about Joe, then I’d just shrug this off and be done with it. But I do like him and I like being able to follow his tweets but for some reason I cannot fathom, I’ve been blocked.

In the grand scheme of things, it doesn’t matter. I know this. And if suddenly I’m no longer blocked (because you know I’m going to keep checking for awhile), I don’t even know if I want to follow him again without explanation. And I’m never going to get it. And I’ll probably be forever banned.

If I ever meet him, I’ll ask him why he blocked me. If it’s his “people” then I’d definitely like to know what the hell I supposedly did to get blocked. If it was a deliberate act of blocking, then that’s just a bunch of crap. And if it’s just a glitch, I hope it rights itself soon. Otherwise, I will think it was deliberate on someone’s part…