the dark of your sins

My first reaction? Oh yes– WHAT THE F–K?! 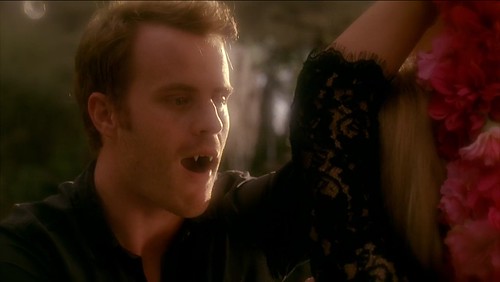 Warlow – Seriously, did spending time in that other plane just totally rob his heart of his light?! I was kinda looking forward to watching his struggle with the two aspects of his soul– the light of the faes and the dark of the vampires. But no, he somehow gave in to the darkness, admitting to Sookie that all he wanted was sex and blood from her. Really? So was it really all talk with him? Was I reading more into his character because I wanted more or because earlier episodes hinted at more and the powers that be decided to toss out any kind of backstory for him because it was just easier to make him ALL EVIL? I personally think TPTB forgot that CHARACTER DEVELOPING is just as important as the action and they robbed us of so much potential. Plus damn, I really liked Rob Kazinsky! He was just a nice shot of yummy on a show that has all kind of crazy yummy! I am very sad to see him go… 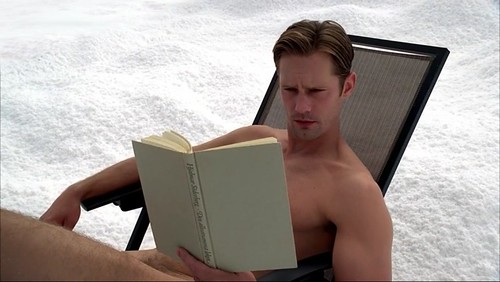 Eric – If what happened at the end was seen all the way through, I do not know if I will watch True Blood again. Eric draws the most interest from me because of so many reasons and the thought of him NOT on the show is just too much to accept. As much as I adore Joe Manganiello and Alcide, he’s not enough to compel me to watch the show. Alexander Skarsgard’s Eric is. There, I said it. 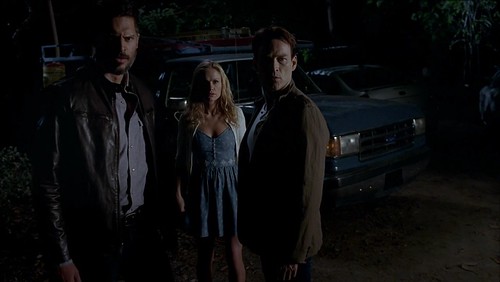 Alcide – I’m probably the minority in this but I don’t really care for him with Sookie. I get it, he had to have his turn with her. But couldn’t we have at least seen the progression of their relationship just a little? Suddenly they’re a couple and going to church together? Really? Maybe I’m just jealous. Okay, I’m jealous! Why does Sookie get all the hot guys?!… Other than that, I’m glad he’s no longer a packmaster (though he can be my master anytime… wait, did I just type that and leave it?!… anyhoo). He was such a big ASS as packmaster and I much prefer him the lone wolf of warmth and loyalty.

Bill – Well thanks for saving Sookie from Warlow and all but now you’ve turned into lovesick and protective Bill again? Find someone else, Bill. Just freakin’ find someone else!

Sam is mayor. Is he married to the pregnant chick?… Poor Jessica, trying to make amends. A vampire with a heart. I hope she’s dating the vampire band man James. He’s cute for her… Tara and her mother were kinda creepy but okay… I like Andy and his papa ways with his daughter, who had the best line, “I’m only two weeks old!”… Arlene owns Merlotte’s now? I hope she still has some money in the bank!…

Hep V mutated vampires. Why do they look like zombies?

1) Zombie Vampires – I don’t like zombies, they have zero value to me. I don’t watch The Walking Dead mostly because I DO NOT LIKE ZOMBIES. If True Blood decides to do zombies, I’m going to take my viewing habit elsewhere…

2) Eric met the True Death – What’s the point of watching if there’s no Eric Northman? Seriously? I feel in my heart of fangirl hearts that Alexander Skarsgard is coming back to True Blood because there is no way TPTB are that stupid. Right? But if indeed poor Eric has turned into globby goop, I will no longer watch the show.

I’ve read some recaps here and there of the episode as well as the season overall. My take? Season six was entertaining but I spent way too much time not liking some of the storylines as well as the characters. (Alcide’s whole packmaster plot and Sam’s new chick SO SOON after Luna, for example.) I cannot hate too much on season six because it did bring us Robert Kazinsky as Ben/Warlow and until the very last episode, he was quite an interesting character. 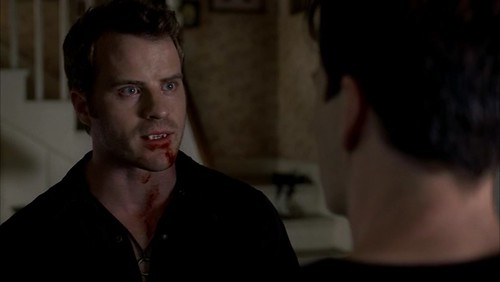