why each breath I take feels new

poem #1:
do you understand
why each breath I take feels new
when I look at you

poem #2:
I will haunt your dreams
infiltrate your memories
to the end of days 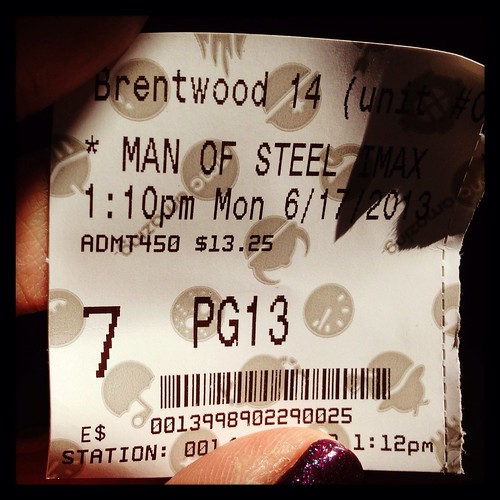 We saw Man of Steel today. Let me just say WOW, I totally get why the ladies love Henry Cavill. And ladies, if you don’t love him yet, you will love him after this movie. Yowsa.

Thoughts on Man of Steel… I like the way his origin story was handled. I like the glimpse of Krypton and the flashbacks of Clark’s life in Kansas. I was oddly impressed by Russell Crowe’s performance. I enjoyed his take of Jor-El. I even liked Kevin Costner as Jonathan Kent. I had mostly not cared for the casting of Amy Adams as Lois Lane even though I like Amy Adams well enough but she was perfect as this rendition of the character. Michael Shannon as General Zod was fantastic! He brought just the right amount of singlemindedness and complexity to the man. You understood the reasons behind his actions while also mourning his lack of compassion and abhorring his methods. And Henry Cavill was just as perfect to me as Clark Kent/Kal-El. He looked GREAT in the suit, which in itself was a fantastic update of the classic. I will say that I had my reservations on the choice of actor to play Superman but he has the right amount of gravitas and humor to give lift the character from unrealistic ideals. And damn, he is super easy on the eyes. (See what I did there?)

Among the things I liked (and I did like a lot of the movie) was the way the relationship between Clark and Lois was handled. (I want to say more but perhaps those observations would be considered spoiler-ish so I’ll leave it at that.) I also liked all the actors I noticed in bit parts! This plays like spot the Canadian actor… Alessandro Juliani (who was in the show Smallville), Mike Dupod (in a very small role here but he still caught my eye, I last saw him in This Means War), Tahmoh Penikett (of Battlestar Galactica and Dollhouse), and David Paetkau (from the awesome show Flashpoint, which recently finished its run). The word “Superman” was uttered first and almost only by David’s character.

All in all, I enjoyed the movie. We saw it in IMAX (but not 3D) to a nicely filled (but not sold out) auditorium. R asked me which I would choose between Man of Steel and Star Trek Into Darkness but I cannot say because I enjoyed both films for very different reasons. So, would I see Man of Steel in the theatre again? Only time will tell.

(Hmm, I get off early on Friday. I could hit the matinee at the Delta…)