and so goes hope’s light

The poem is my reaction to last night’s episode of Game of Thrones. 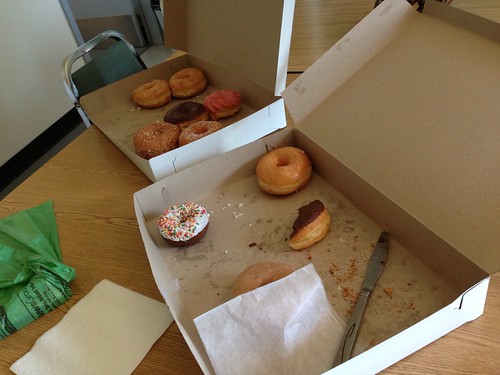 Before I do that Game of Thrones thing, a rundown of the day…

I brought doughnuts to work because I finally drove the new car today! I love it. It’s so freakin’ zippy. And the folks at work appreciated the Monday sweets, I hope.

Lunchtime a bunch of us used our Mountain Mikes vouchers for lunch. It was great to get away from the office and just relax for lunch. Nice! And for dinner I brought home hot dogs.

If you have a mind to eventually watch the series or have not yet watched last night’s episode, DO NOT READ ANY FURTHER. You will be spoiled and I will not bear the responsibility of it.

BRAN
It’s so weird hearing Bran speak now since not that much time was supposed to have passed but you know, he’s growing up and now his voice has changed. Ah well. I was not sad for him when he told his brother he had to leave (I’m not a big Rickon fan)… I really dug the whole Warg thing and was so glad that he at least got to see his brother Jon, even if it was while in the mind of his direwolf…

JON SNOW
Oh Jon Snow. I knew he was going to leave the Wildings at some point but it was still gutwrenching to see Ygritte’s disbelief. She trusted him and he was a crow to to his bones. Alas!

DANY
I am really digging Daario Naharis. He intrigues me. And he’s dashing and charming and so bad. Yet he smiles that knowing smile and you pardon yourself the wicked thoughts running through your mind. Maybe.

ARYA
Oh Arya! So very close, so close to seeing her mother and her brother. But oh, it was not to be. Why?

THE RED WEDDING
I have read the books and I knew that this event would happen and I despaired all season because of it. Every loving moment Robb shared with his wife was like a cut deepening with every smile. I knew and yet hoped that it would not happen. And when it happened, I cried as if I hadn’t known all along his fate and his mother’s fate. (Since Talisa wasn’t quite the same character in the book, I wasn’t sure her fate at first until they revealed she was pregnant. Oh then I knew.)

The saddest moment was when Robb stood up and looked at his mother after having watched his wife die. The fight was gone in him. It was so heartbreaking. HEARTBREAKING.

I have to say it was one of the BEST episodes of the series because it had a little of everything and a lot of the Starks. Oh Starks.