I meant to post visual evidence of my lockscreen changes. 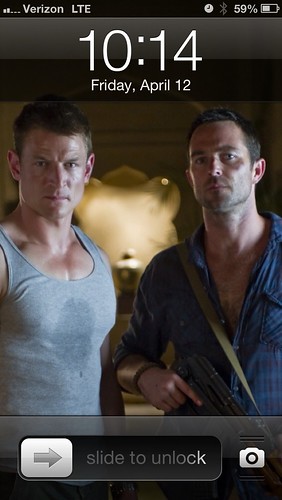 my current lockscreen: Philip Winchester & Sullivan Stapleton from Strike Back

You could say that I’ve got a thing for the fellas from Strike Back and you’d be right. From the beginning I’ve pretty much favored Philip Winchester (who plays Michael Stonebridge) but very recently Sullivan Stapleton (Damien Scott) has gotten under my skin. Can I blame Ryan Gosling and the movie Gangster Squad? Okay, I think I will. It’s all Ryan’s fault! Well, maybe not really. 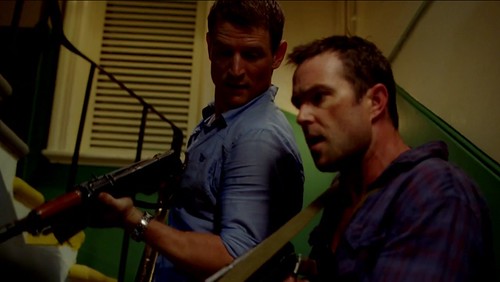 When we started watching Gangster Squad, I thought, “Someone is in this movie? Who is it?” You know, besides the obvious cast. Then the Jack Whalen character showed up and the light bulb went off. Sully! I liked his part in the movie but was not quite satisfied until the F-word came out of his mouth. I love how he cusses on Strike Back. LOL Anyhoo, he cleans up rather nicely and I noticed.

And as it so happens, I was in the middle of writing a story bit and suddenly the main fella started turning into Sullivan Stapleton. WTH. My imagination demands a visual for my main characters so there it is.

I’m sure this passing fancy is quite passing. I should just hurry up and write the story before my regard for him fades and I don’t want to think of him as the fella in my story. LOL Or maybe I should just watch more Strike Back because that show kicks serious ass. It’s such a guy show (military spies, lots of gun play, fair amount of sex, etc) but I love that stuff. Weapons in the hands of hot men just does something to me. Rarr. 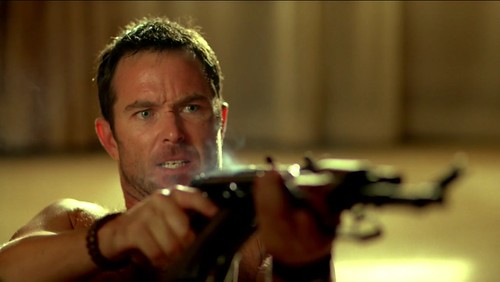 All these thoughts about Strike Back combined with a cool lime refresher (trenta sized!) made for an interesting Friday. I think the refresher made me super cheeky because I tweeted out:

I’m so close to changing my computer wallpaper from @OfficialEdQuinn to one of those Strike Back boys. Stop me, someone?

And then I replied:

@gemininoir @OfficialEdQuinn I need some incentive to keep him as my wallpaper. Those Strike Back boys are beckoning me. Hard.

Super cheeky, right? I’d like to think I wasn’t totally trolling for a response but you know, if I got one, I wasn’t going to complain very much. LOL So of course I was quite delighted with the reply: 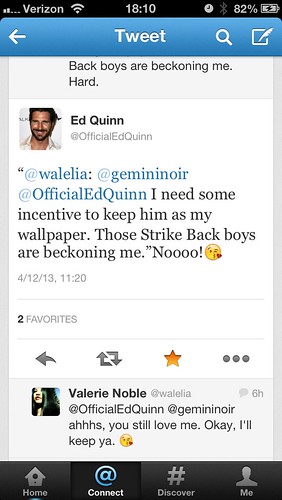 Like my reply? I will blame 1) the fact that it was freakin’ FRIDAY, 2) the cool lime refresher, and 3) Gangster Squad. But seriously, I think it’s awesome and sweet that Ed replied. Of course, it was incentive to keep me from changing my computer wallpaper. I didn’t say anything about my lockscreen. LOL Below was my lockscreen before the Strike Back boys. 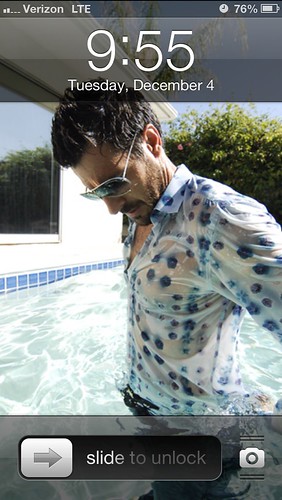 It’s really strange seeing Winchester & Stapleton instead of Ed when I turn on my phone. But I do feel less naughty when I slide to unlock.