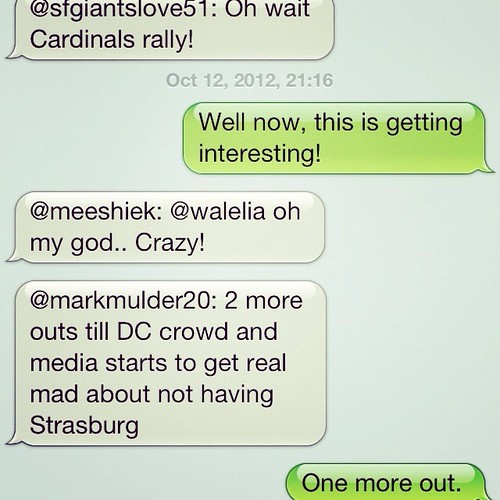 my sms twitters at the bottom of the 9th

Mark Mulder was supposed to be working but he was tweeting at the bottom of the 9th last night. LOL Oh man, that ninth inning almost KILLED ME! We should not forget that I am also a Cardinals fan and I was seriously preparing myself for more heartache and silently promising myself that I would not watch anymore baseball this postseason if the St. Louis Cardinals fell to the Washington Nationals. But lo, the Cards tied it up THEN took the lead! HOLY CRAP! It was so awesome and nerve wracking!

So now the Cardinals are heading to San Francisco to face the Giants. It should be a rockin’ series. If I could go, I’d wear my Cardinals jersey proudly (and take a picture to show Mulder).

As for the other series, I am SO DISAPPOINTED that the Baltimore Orioles lost to the New York Yankees. I was hoping the Orioles could do it. Oh well, I guess it’s up to the Detroit Tigers. I hope it’s an interesting series at least.

Regardless of teams, I’m going to have to cheer for the National League to win the World Series this year. So, LET’S GO CARDS!!!