oh so hard to bear

I had to go to work today. Oh no. It’s not that bad really. My next work day is Friday and I only have to be there for four hours.

Once long ago, Mark Mulder was my most favorite baseball player. He was 1/3 of our Big Three (Barry Zito and Tim Hudson being the other two) and I just freakin’ adored him! He was an awesome pitcher, tall and handsome, and just dreamy. He made appearances at our local Tristar Shows and I took pictures with him three years in a row. The pic above is one of my favorites. I look so little beside him! He’s 6’6″, so I’m sure lots of folks look little beside him. LOL!

Mulder’s career didn’t last as long as it should have, alas, but his best years were with my A’s, so I was always glad for that. His other team was the St. Louis Cardinals, which happens to be my NL team (mostly because the hubby is a Cards fan). Nowadays Mulder can be seen on ESPN’s Baseball Tonight, always looking sharp.

Just last night I saw him on tv and today I thought, Hmmm, wonder if he’s on Twitter. And of course I found him! I’m wondering a bit why I didn’t think to search for him before but such is life. So surprised I was by seeing him on Twitter, I just had to follow him and then comment about it. I wondered if I would get a response (and pretty much hoped I would). It’s a crapshoot really, on whether these guys will reply. But lo, Mulder did! 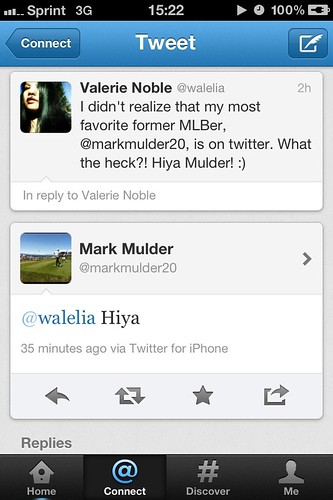 So I’ve had a smile on my face since that reply. I guess I just got lucky!

Now, if I can only get Joe Manganiello to reply to me. Hmmm…