the things I would do for you 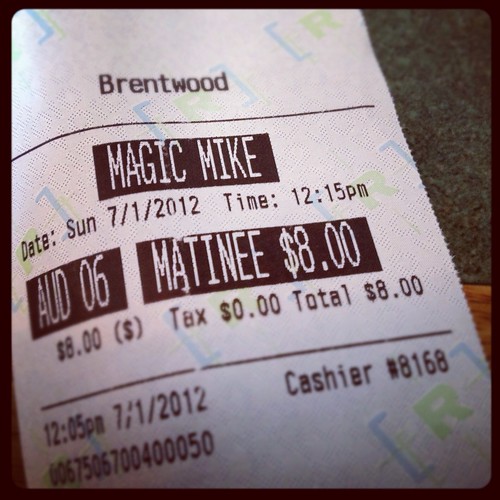 What did I like? Well, I LOVED all the dancing scenes and really would have loved MORE of those, especially any and all featuring Joe Manganiello’s “Big Dick Richie.” I loved how his first scene was him at a sewing machine working on a gold thong while wearing dark rimmed glasses. It was so funny and cute!… Matthew McConaughey was a freakin’ HOOT! He had some of the best scenes in the movie and he was alternately hilarious and slick and kinda skanky. He was incredible and deserves any and all accolades regarding his work on this movie. This article says it all for me… Channing Tatum, wow. First off, that boy can freakin’ DANCE. He knows how to work that body of his and it’s really beautiful, sexy, and inspiring. So once again, WOW. Second, he’s actually a pretty decent actor. I felt bad for his Mike in the one scene where he sees his hook-up gal and he realizes what exactly he means to her…

What did not work for me? The Kid’s sister, Brooke. I think it had mostly to do with the actress (Cody Horn) portraying her. I think I’ve turned into a superficial chick in some respects because if the actor or actress isn’t at the very least decent in the craft, then they had better be beautiful. And sorry, she just did not do anything for me at all. Hell’s bells, Riley Keough, in her limited role, managed to convey more emotion in her bits than Cody Horn’s Brooke. The only thing Brooke seemed to be was pissed off and judgmental. But hey, maybe that was the character’s angle. I just didn’t care for her (but I didn’t even like her in the previews).

What else? Well, I LOVE Olivia Munn so it was wonderful to see her, even though she had a little part. I know she has her haters but I adore her because she’s sassy, smart, and sexy. Plus she’s half Asian and I must support my fellow Asians, especially when they’re hot like her.

I have to mention that I saw this movie without any girlfriends. I truly believe there were NO MEN in the auditorium but it was full of women. I guess the men out here in Brentwood know better than to watch a movie about male strippers. And we must not have many gay men out here. LOL! Most of the women in the theatre came in packs though there were duos here and there. It was great people watching, especially when the lights went down and the movie started. You’d have thought the men were actually in the auditorium grinding their way down the aisles. It was great! I’m glad I saw it without the hubby. He would have been rolling his eyes the whole time and it might have distracted him from the fact that the movie actually had a decent plot.

I should probably also mention that back in my younger days, I did frequent a male revue show for awhile. Gosh, I loved watching those dancers do their thing and I willingly handed over my dollar bills. It was great fun. So while I was enjoying the movie, I was wishing that I could have been an extra on that set.

So would I recommend the movie? Hell yeah! Go see it with a friend or two or three. It’ll be more fun that way.

Oh, while I was driving to the movie theatre, I was listening to the 80s station and they played Duran Duran’s “Hungry Like the Wolf.” It made me laugh because I was on the way to watch a movie that has Joe Manganiello in it and his day job is True Blood as the werewolf Alcide. So the song made me think of him, like I wasn’t already thinking of him…

Speaking of True Blood, this week’s ep was another good one! I relished the Alcide scenes. And oh, he almost freakin’ made me cry! And damn that Sookie, drinking with Alcide towards the end. No fair!